NOTE: Due to Erk’s time out of Australia in early 2014, this show is on a hiatus. That said, Erk will be recording content for the show in America (January/February), Japan (February), Singapore (February), Perth (April), UAE (June), Germany (possibly – June) & London (June). The show will return in the first quarter of 2014.

On The Rails With Erk is a personal railway podcast. Erk has been employed in the railway industry for nearly 20 years (hard to believe!) in a range of roles including customer service, station presentation, law enforcement, security & train operations. The views in this podcast are general in nature & are personal to Erk & that of any contributor. They do not necessarily reflect the current or previous procedures or policies of Erk’s employer or other operators. Different operators & sectors of the industry have different terminology & methods specific to their sector.

So why a railway podcast?

Another interest of Erk’s is travel and aviation. Erk has noticed over several years that there are a lot of great aviation podcasts by people inside & outside the industry but very little in the way of railway podcasts. The industry traditionally does not allow their employees to speak to the media & there always seems to be some sort of secrecy about the industry. Compare the number of ride-along police shows such as COPS or fly on the wall shows at various airports around the world & similar railway shows as a classic example.

While using social media & during other podcasts, Erk is often asked about railways & his job by interested people. When people find out what Erk does for a living (he is currently a train driver), people are usually full of questions.  While he has spoken about trains on his talk podcast Erk Pod over several years on occasion, this podcast is dedicated to all things on rails. He has thought about a railway podcast for several years but became more sold on the idea while listening to The Airline Pilot Guy podcast. Hosted by Captain Jeff from the fictional airline Acme, he gives informed opinion about aviation news and incidents as well as the questions that you wish you could ask an airline pilot but you don’t happen to know one personally. This podcast aims to be similar in style to Captain Jeff’s show but in Erk’s style. 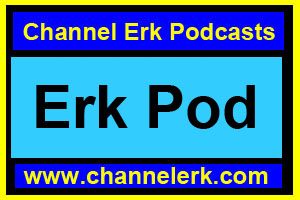